A place to refresh one's soul

Jujube trees produce Chinese dates. They are edible, oblong red fruit much like palm tree dates although the tree is not a palm.  It has been part of Chinese culture for a long time; it was among the fruits excavated from a tomb of the second century BC. There are an estimated four hundred different kinds. The one in my garden is called the Dragons-claw Chinese Date because of the contorted shapes of its branches. In the winter after the leaves have fallen, I like to see these angular branches silhouetted against the sky.  Click on an image to see its expanded version. 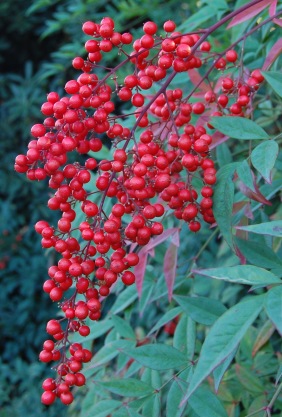 Berries of the heavenly bamboo.

Heavenly bamboo is not a bamboo. It looks similar to bamboo from a distance, but is a woody shrub, not a grass. The heavenly part of its name arose from the ancient practice of using it to decorate altars. In winter, it forms bright red berries appropriate for any holiday of the season.

Bananas by the door

Bananas were often planted near doors and windows in China. Inside the house, the deep jop jop jop sound of water striking their broad leaves provides a pleasant change from the rushing noise of summer showers. There are no summer showers in California, but I planted bananas near doors and windows just because I like to look at them. Their broad leaves add tropical lushness to the garden.

The weeping snow fountain cherry tree by the pond presents an exclamation point to the foliage changes wrought by the seasons.  With no edible fruit, it is dramatic by just standing still. 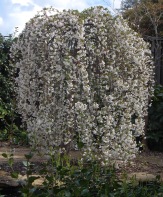 Over thirty varieties of plants grace my garden. Almost all of them have botanical origins in Asia, although they obviously are readily available in California. I list below my garden plants with their common and scientific names. Most of them can be found in gardens in China.

This site uses Akismet to reduce spam. Learn how your comment data is processed.